After a bottle of wine (secretly smuggled on board), a Pam sandwich and a bad movie we fell asleep on our 11 hour night bus from San Cristobal [10] to Oaxaca [11]. Apparently there were 4 police/army inspections but I slept through.

In July 2011we’d hiked in the Sierra Norte (mountain range to the north of Oaxaca) and enjoyed it so much we wanted to go back.

Day 1 Oaxaca to Latuvi by bus
Our trek developed into a bigger adventure than planned. Triple checking our bus to the starting point of Latuvi, we found there was no bus on Saturdays. Plan B – 1st class bus to the pueblo El Punto and then taxi failed because that bus would not stop there. Plan C looked good – 2nd class bus (turkey bus), full but we got a seat. Then the main road was blocked for unknown reasons so the bus took a rough dirt track for an hour only to find it barricaded by 2 trucks and no way back. The Mexicans all stayed calm, the 2 gringos tried to look Mexican. After about 30 minutes of negotiations we were allowed through. Phew! We got off at tiny El Punto. A taxi stopped so soon we were at Latuvi, a small Zapotec village in the mountains at 2400 meters. The roaring fire in our lovely adobe cabin kept us warm all night.

Day 2 Latuvi to Lachatao hiking
The 14 kilometer hike from Latuvi to Lachatao follows the Camino Real, the pre-Hispanic trade route that connected the Pacific and Atlantic Oceans. The ancient Zapotec capital Monte Alban near Oaxaca shows Olmec influences from the Gulf of Mexico from around 500 BC. They walked this way! It’s a spectacular path through cloud forest, the trees laden with Spanish moss and bromeliads, descending from 2400 meters to 1900 and climbing back to 2100 at Lachatao village. Our cabin tonight was high up on a ridge overlooking the huge 16th century Romanesque church of Santa Catarina. Nice spot but a bit of a hike back in the dark after dinner.

Day 3 Lachatao
Our guide spent the morning explaining the exhibits in the museum and took us to the barely unearthed sacred Zapotec site (Jaguar Hill) with its plazas, pyramids and terraces, occupied from 2000 BC. Escaping the Aztec and Spanish invasions, the local people buried it. You can still find ancient pieces of pottery and grinding stones lying around. From complex stone carvings BC, the Zapotec craftsmen here transitioned to the Spanish Baroque in the church.

Day 4 Lachatao to Oaxaca
An easier trip back – first a camioneta (ute) to the main road, then a shared taxi (5 people in 3 seats) to the outskirts of Oaxaca and an urban bus to the center which took an hour in the traffic. 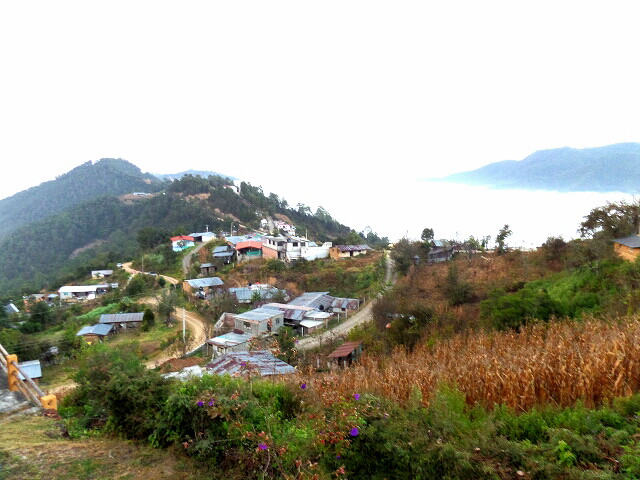 Latuvi, a Zapotec village at 2400 meters in the mountains north of Oaxaca 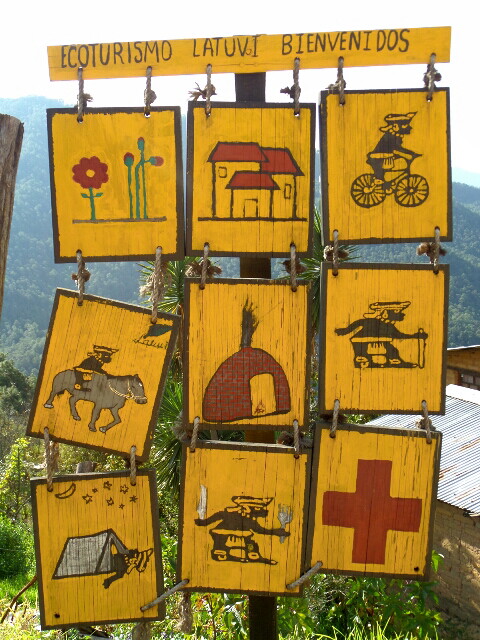 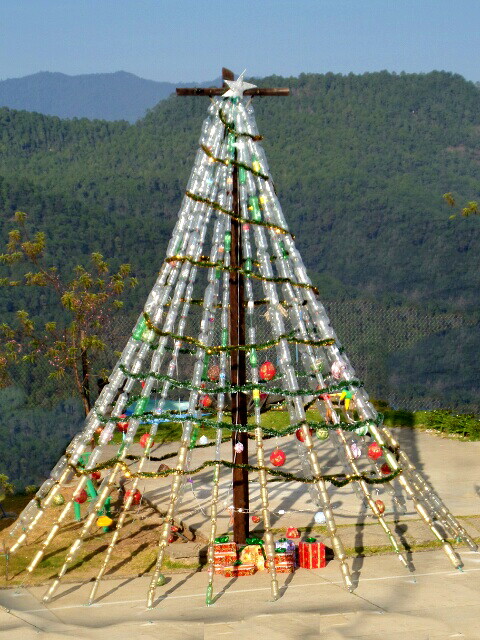 The school Xmas tree, from recycled plastic bottles - trees are no longer cut 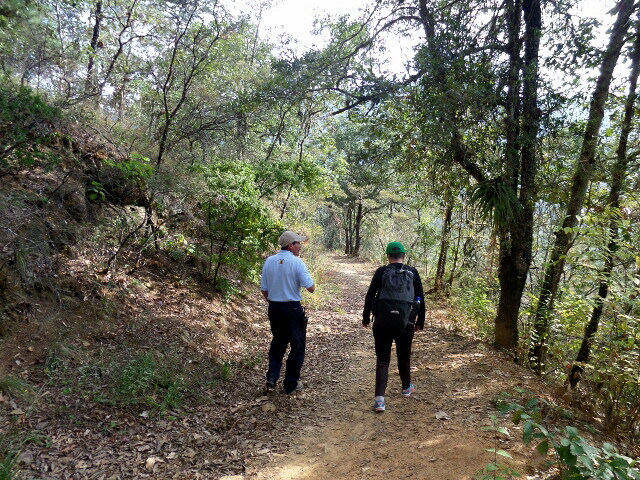 Setting off on the Camino Real from Latuvi 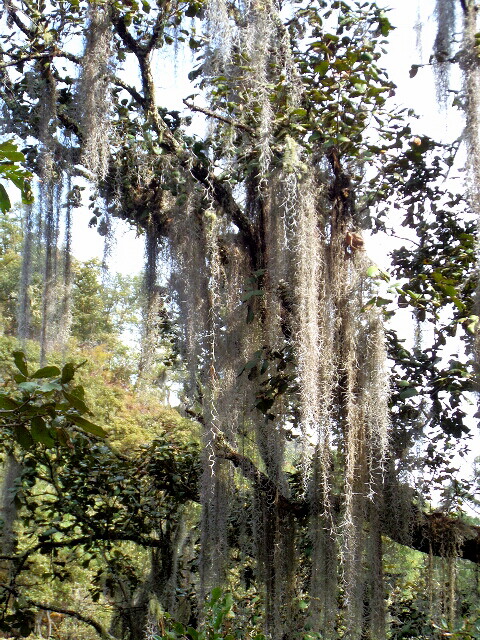 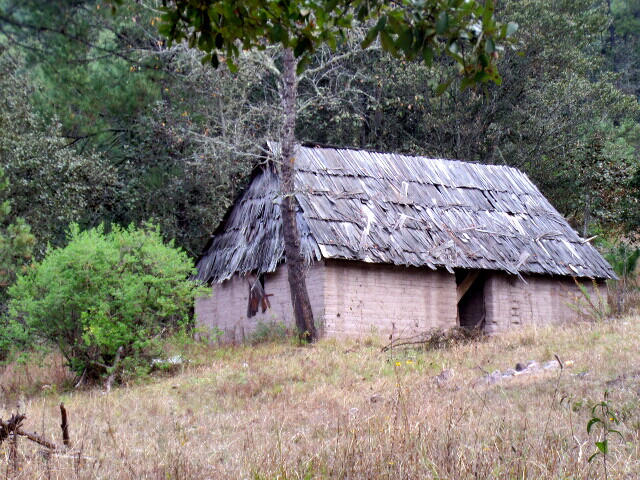 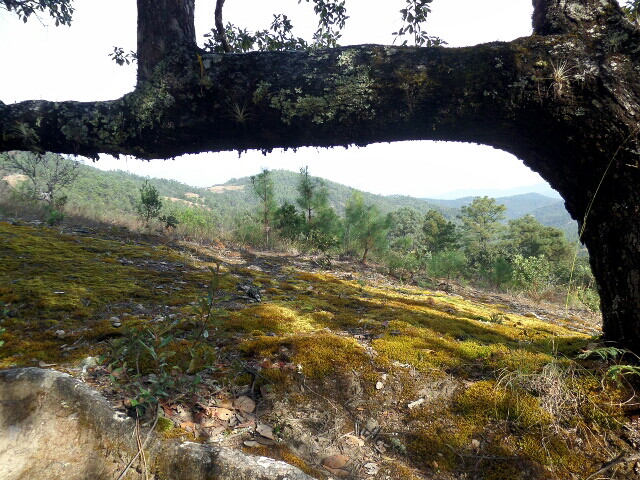 Many years ago this tree was trained to form a fence 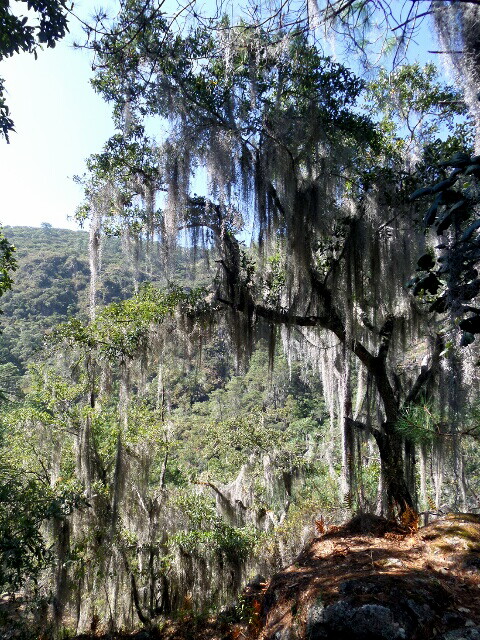 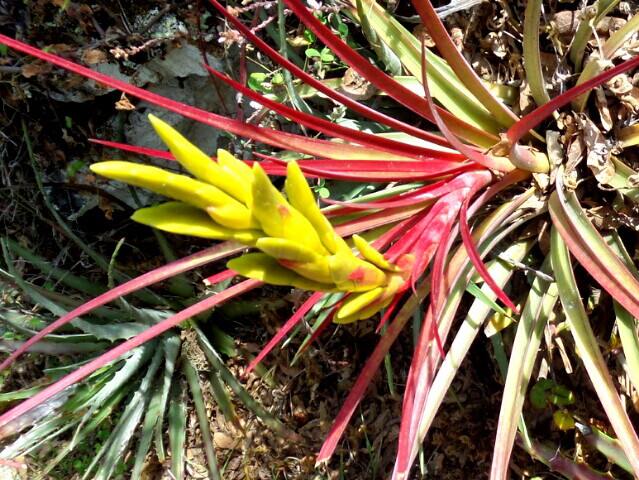 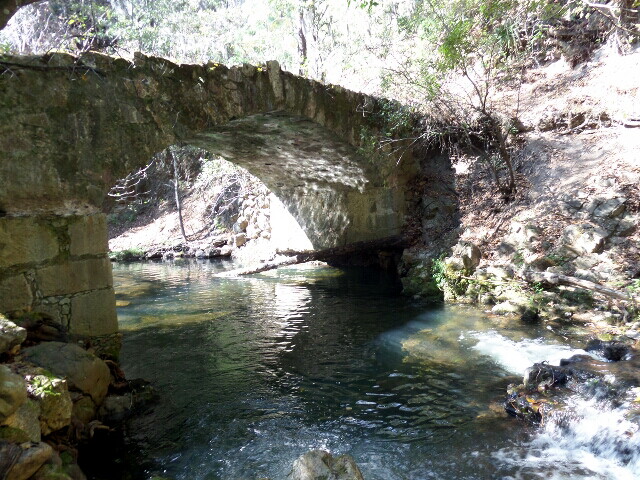 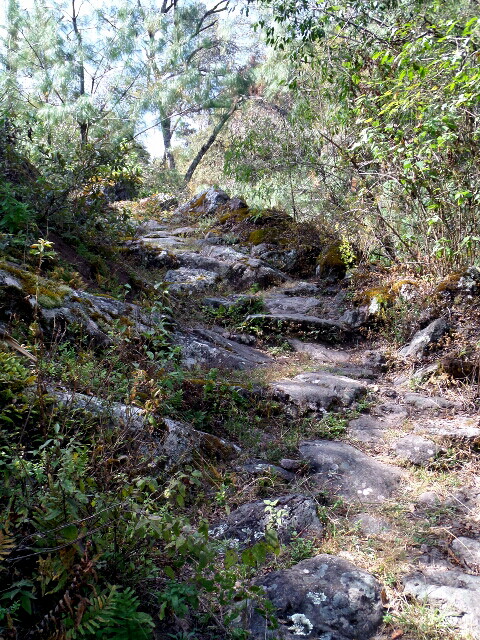 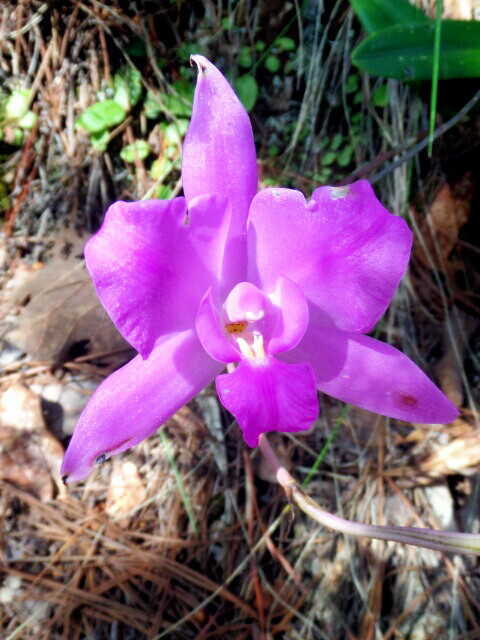 Orchids bloom even in winter 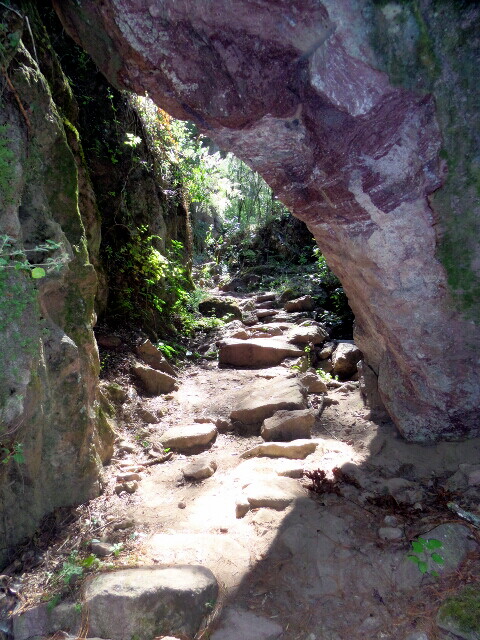 Camino Real through the canyon 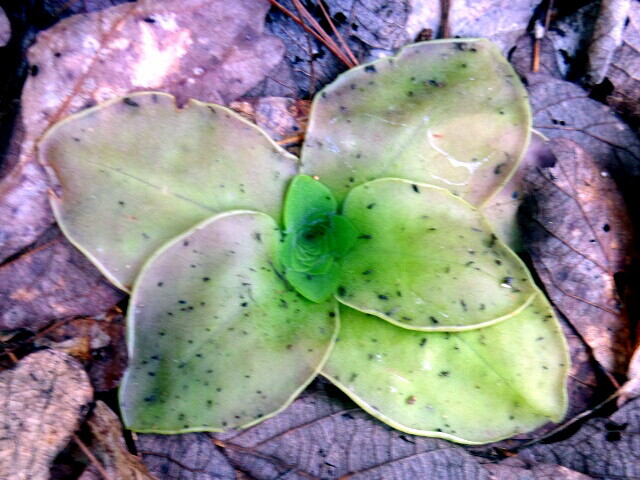 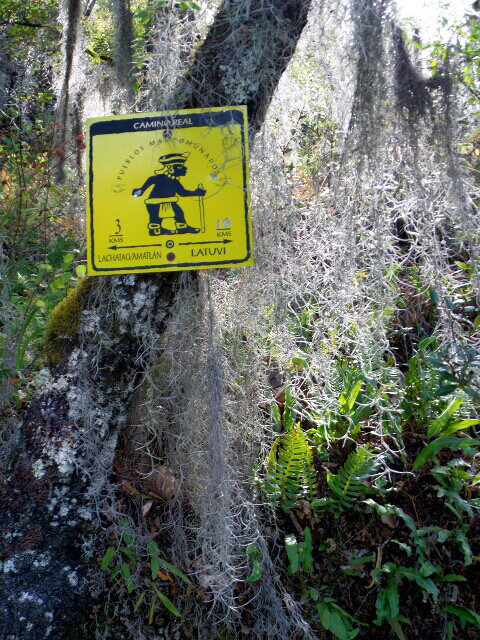 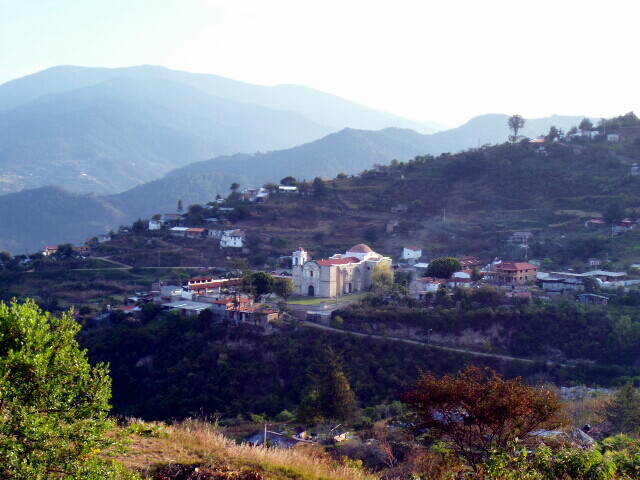 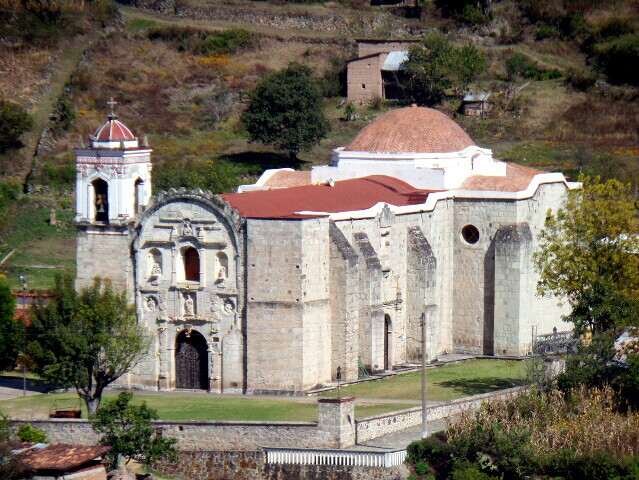 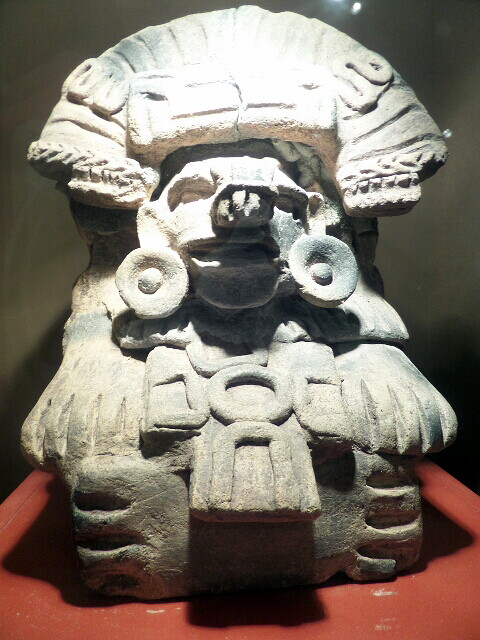 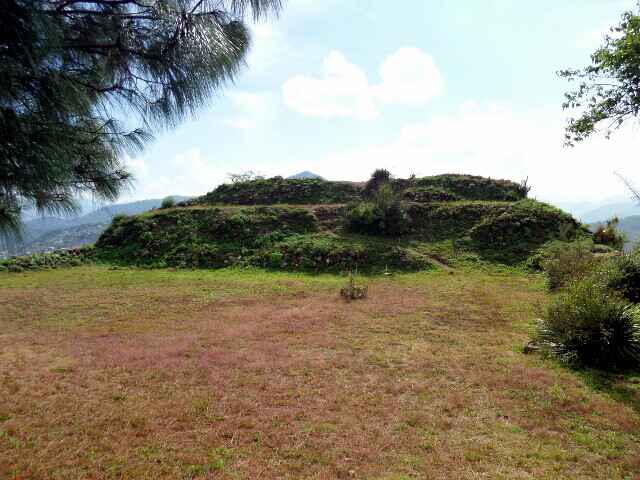 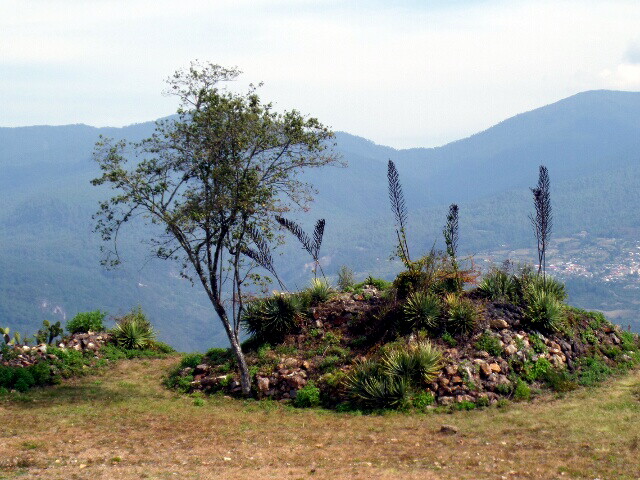 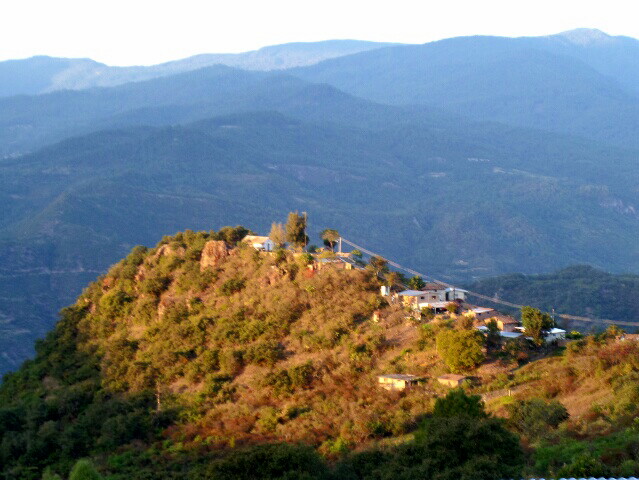 The next village is San Miguel Amatlan